"The Dog from Down Under" 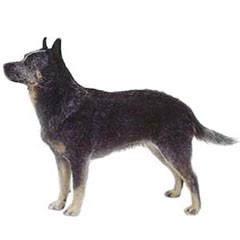 The Australian Cattle Dog is the result of many years of cross-breeding efforts, with the intention of creating a dog that met the various demands of working cattle in the rugged outback. Throughout the eighteenth century, the raising of cattle in Australia was a relatively small business, confined in around the Sydney area. In 1813 the vast Australian Dividing Range had been opened up and crossed, promoting thousands of settlers to move into the vast areas and set up their cattle stations. This created the need for a cattle dog with different qualities. For example, they needed a dog that could tolerate the intense heat; work quietly for days and nights at a time; and, after dark, literally sneak up on the cattle, which had become wild and dangerous to herd. After decades of trial and error, the ideal dog was developed by crossing blue merle Smooth Collies, imported from Scotland, with the wild Dingo of Australia, and then later introducing the Dalmatian and the Black-and-Tan Kelpie, an Australian sheepdog. The Australian Cattle Dog as we know it today was the result. Ultimately, these dogs became indispensable to the cattlemen of Queensland and were originally called Queensland Blue Heelers. In 1902 a breed standard was written, accepted and endorsed by the original Kennel Club of New South Wales one year later. At that time, the official name of the breed was changed to the Australian Cattle Dog. The breed was accepted for registration by the American Kennel Club on May 1, 1980, joining the Working Group for competition later that year, and shifted to the newly-formed Herding Group in 1983.

This is a tough, no-nonsense dog that can stand up to the tonnage of obstinate cattle living freely in the immense cattle areas of the outback. Although he can be gentle and somewhat affectionate with his family, he is highly territorial and cautious with strangers. Despite his independent streak, he is highly trainable and willing to please. He is obedient but aggressive with other dogs. He will definitely bite if treated harshly or abused in any way. This dog becomes bored easily unless he is exercised vigorously or given a demanding job. Otherwise, he will become destructive. Because this is a herding dog, he makes an excellent watchdog but his herding instincts compel him to herd humans by nipping at their heels.

This is a medium-size dog, compact yet exuding power and strength. The male stands approximately 18 to 20 inches from the shoulder and the female stands approximately 17 to 19 inches from the shoulder. Weight is between 35 to 45 pounds. He is covered with a double coat. The top coat is short, hard, flat and coarse. The undercoat is also short and dense. His coat is seen in blue (blue-mottled or blue-speckled) or red-speckled.

Given this breed's instinct to protect, guard, and herd, it is absolutely essential to socialize puppies as soon as they are brought into the home. This means being playful and affectionate, introducing the youngster to many new people and other dogs, and taking him to new places. This sweetens the dog's personality and makes training much more successful. Socialization and obedience training will neutralize the tendency toward aggressiveness and stubbornness.

His coat is short, straight, and smooth. His undercoat is dense. There is some light shedding and the dog requires a good brushing at least once a week. Bathing is unnecessary unless he got into something foul resulting in a bad odor. Check his nails for exaggerated growth every few months. Have a veterinarian or professional groomer show you how to trim them.

There are some incidences of elbow and/or hip dysplasia. There is the possibility of developing progressive retinal atrophy (PRA) and some risk of various skin disorders, including dermatomyositis.

Zip from "Last of the Dogmen"