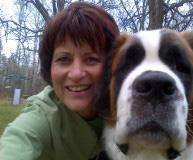 Silvia is a physiotherapist who graduated from the University of Manitoba in 1983. After graduation, she specialized in orthopedics and acupuncture, becoming licenced in acupuncture in 1986. Silvia was the first group of physiotherapists trained in acupuncture in Canada! Her special interest focuses on animal rehabilitation. She began her animal rehab training in 1999 for both small animal and equine, and has worked as an animal rehab therapist/practitioner since 2001. She performs both physiotherapy and acupuncture on dogs, cats and birds. She has completed post-graduate courses directed by the Canadian Horse and Animal Physiotherapists (CHAP), and is qualified in Physio-based Evaluation and Therapeutic Rehabilitation (PET). Also, Silvia has completed other courses including TTouch, Reiki II, Cranio-Sacral Therapy One. She is a director and instructor for CHAP as well!

Silvia and her husband share their home with their two children, 2 dogs, 3 cats, several fish, and a variety of foster pets.